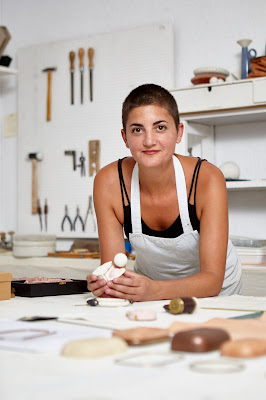 -The ArtsFAD second prize was awarded by the jury jointly to the works Diamond Amphora, of which it took account of “the complexity of the artisan technique, the treatment of the different materials and the excellence in the piece’s interrelationship and symbology”
Disseny Hub Barcelona, Spain

-The Bórax08001 collective,Jewellery Displaced-Paris, This event will take place within Les Circuits Bijoux, an initiative of great magnitude that encompasses the whole city of Paris and is organized by les Ateliers d’Art de Franc, , París, France.

-Collective exhibition Bórax08001, will travel to Valencia in a few days to take part in the series os exhibitions and conferences that will be taking place as part of Melting Point 2012 Joieria Contemporània València . This event has been organized to celebrate the ESAD’s Jewellery Department 10th anniversary and the arrival of Schmuck (the most prestigious contemporary jewellery exhibit) to Spain for the first time, being Valencia its host.

-Collective exhibition New Harvest, is a group of young artists who participated in the annual International Graduate Show 2010 at Galerie Marzee. These artists were invited by Galerie Marzee to participate in several workshops in atelier ravary (Belgium) in 2010 and 2011, in order to stimulate and further develop their work.

-Collective exhibition "Bórax08001" in Amsterdam
B-side Festival, with a series of Actions,
entitled Jewelery Displaced, on the streets of Amsterdam

-Exhibition “naturaleza muerta con ombligo” (still life with navel) show the pieces created during March and April as a resident artist in the “Besiendershuis”. Gallery Marzee in Nijmegen, Holand

-Collective exhibition Bórax08001 "What do you have in your hand?" at the World Craf Council Belgium, Mons, Belgium